The Peninsula Saddle Club has been a member of the Long Beach Peninsula Community for nearly three quarters of a century. Our connection runs deep. To the horses. To the people.

It may seem like we have always had a rodeo, and true, it has been with us for a number of years. 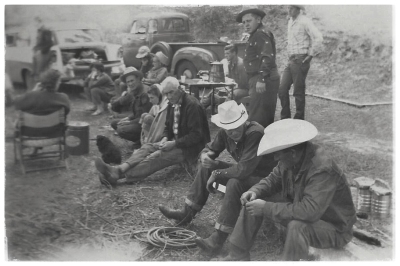 Many of the charter members of the Peninsula Saddle Club are well known to us all. The club’s original trustees, elected in 1949, were Mark Urban Jr., J.T. Wright, John Sacks, Jack Nyberg, and M.S. Poe.

Evidence of the fine horsemanship talents present in the early days of the Saddle Club is contained in the fact that both in 1949 and 1950 the Saddle Club’s pony express team won the event. Although our records do not show the members of the 1949 team (and perhaps they were the same riders), the 1950 pony express team consisted of: Doc Deccio, Jerry Nyberg, Roy Gray, Gene Wright, J.T. Wright, Steele Sacks, and Red Monroe.

Local interest in horsemanship continued to grow and membership in the Saddle Club continued to increase. On September 18, 1950, the club leased from the town of Long Beach the ground where members planned to build their first clubhouse and rodeo grounds. The location is where the new Long Beach first station is now located. The lease documents show that Jack Nyberg was president, and Emery Debow, Jerry Nyberg, and Jack Church were board members.

Although there has been pony express races and parades in the two preceding years, in July 1951 rodeo events were added to the festivities. Shirley Hutton was elected the very first rodeo queen, and the club now had its very own rodeo.

In October 1951, the club secured permission from the town of Long Beach to construct a clubhouse on the property they had leased. The log-type structure was built with blood, sweat, and tears, some donated materials, and a lot of donated labor. Many evenings and weekends local pillars of the community, both men and women, could be seen cleaning limbs off logs, digging ditches, and all the jobs that must be accomplished to build a building.

The rodeo continued to grow and in 1953 there were 181 contestants in the pony express beach race. Again, the Peninsula Saddle Club won the event. This being the third time, they were awarded permanent possession of a $100 traveling trophy. Rodeo Queen Trula Wright reigned over the rodeo festivities for this year.

In 1957 the Saddle Club acquired the present rodeo site, although the rodeo continued to be held at the original site. Rodeo queen in 1957 was Jeanie Knapp, and Pat Lincoln presided as queen for the 10th annual rodeo and beach race 1958.

In 1959 the rodeo was held at the new location, the present rodeo site, and Gayle Peterson presided as queen.

In 1963 there was the regular annual rodeo with Queen Kay Myers, and also an all-girl rodeo.

The 1964 rodeo was presided over by Queen Cathy Saunders, and 1965 saw Queen Jackie Petit elected.

In the fall of 1965 the clubhouse everyone had worked so hard to build, and had moved almost by hand from the original site to the present rodeo grounds, burned to the ground.

The pioneering traditions of the Saddle Club member could not be daunted, and in 1966 a new concrete block clubhouse was erected. The 1966 rodeo went on, on schedule, with Queen Diane Alexander presiding.

Although the annual rodeo was held in 1967, records do not show who presided as queen. The 1968 rodeo and Queen Shelly LeDoux, Anne Donnelly was queen in both 1969 and 1970, Patty Ruckles was 1971 rodeo queen, and in 1972 Miss National Rodeo Association Queen served as queen for the local rodeo. Kim Nieme was the 1973 queen, and Carol Back was 1974 queen.

Although it is difficult to believe, the 1976 rodeo, the 28th annual, was rained out. Spectators would not sit in the rain to see the show. Not only was this very costly since the stock contractor must be paid whether there was anyone in attendance or not, but the club needed the money from the admissions, as they had just spent a lot constructing a new arena area and chutes. Members dug a little deeper and the club was kept financially sound.

The 1979 rodeo, the 31st annual, will be the biggest and best yet, and will be presided over by Queen Nancy Alexander and Junior Queen Sharma Jackson. It will be held August 11 and 12. Everyone is invited to this wholesome family entertainment.

The grandstands were replaced in 1976, as were the arena fence and chutes. The chutes and holding pens were further upgraded in the early 1990s. The purchase of aluminum bleachers added 300 seats and a Ford tractor has proven invaluable for the Peninsula Saddle Club to maintain the grounds.

In 2004 eight new solid guard rail pens and a brand-spanking new water sys­tem was added. The two features made it possible to hold more events throughout the year and made the facilities more secure when housing bulls weighing in at close to a ton apiece.

Currently the Long Beach Rodeo, Family Night, poker rides, barrel races, trail rides, and the Cowboy Break­fast during Loyalty Day are the main featured events put on by the Peninsula Saddle Club. The Columbia River Cow­pokes, the local 4-H club, also use the facilities for their activities.

An economical horse camping facility is adjacent to the rodeo grounds for rent by visitors to the area.

A ‘Little’ About Founder Shorty Wright

“I don’t want no glory ride for me, just write about the rodeo,” Shorty once told a Observer reporter.

But rodeo fans deserve to know a little about this guy who has devoted almost half his 84 years to making sure the Peninsula bad a top-notch rodeo with first-class grounds, that it was not allowed to slip into history, to cease to exist.

The rodeo actually began in 1942 as an amateur event using steers and bucking horses, making the rodeo over 75 years old. It was sponsored by local merchants and the Chamber of Commerce, Shorty said. It was held where the fire department now stands and went broke after a couple of years.

Then in 1945, Shorty and nine other men got together and guaranteed the money to buy the 16-acre present grounds. Shorty said they only had­ to pay up one year and got that money back.

You didn’t have to be around Shorty very long to know he is loaded with spunk. He kept three quarter horses at the grounds: Tip, a veteran roping horse, Fancy and Amber, and went for a ride “here and there” every day.

He took care of the grounds where he lived with his wife Ethelyn. After over 27 years there, his affection for the place was clearly evident. Shorty, using his money, bought the mower, Ford­ Ferguson tractor, dish and harrow, that he used to give the place a park ­like appearance.

Shorty was raised in Kansas and worked a few years in and around Enid, Okla., before coming to the Peninsula in the 1930s. He worked briefly on a cattle ranch near Oysterville and for the Northern Oyster Co. prior to taking over a combination grocery store-post office there. Before “retiring” in 1966, he ran a Union Oil service station in Ocean Park for 15 years.

“This rodeo has been my life, I live for this.”

It got into his blood when he was a kid. “I started going to rodeos when I was 10 or 12 years old, he said.

He even tried bull riding for a while but decided he was not cut out for it.

Shorty was a little guy. But it’s a safe bet that those people who knew him, will say he is one heck of a big man.

“Rodeo has gotten to be a technical thing,” Wright said. “We’ve got college boys doing the rodeo, they calculate everything out now.”

One of those college prodigies for the 1975 Peninsula Rodeo, was Amy Alexander of Long Beach.

Miss Alexander, a game showing veteran, was attending Walla Walla Community College and participating on the school’s rodeo team, which finished second in the region that year.

She competed in the barrel racing portion of the rodeo locally. Unlike most rodeos, the local roundup is not held in conjunction with any county or state fairs.

“I really don’t know how long the local rodeo can last,” Wright said. “We’ve been able to find ways to make do over the years but it’s really a shame that the community can’t get behind it, so it could be run more like a business. It’s something that brings people to the Peninsula that is unlike any other event here.”

The Saddle Club, with donations from the local community, continues to be the sole sponsor.

~Excerpts from the Chinook Observer